Some people say that Dostoevsky’s Crime and Punishment is an allegorical novel about a man who talked up butt plugs to a partner who wasn’t into it. Although those who say this aren’t people whose opinion you should value, it does pose a question: how do you do it? We’ve all been there, right? Almost every relationship starts off with a vanilla sex life, where you go biblical before sticking anything up your butt. Your partner gives it a shy lick, and the next thing you know, you’re hanging off a ceiling via an anal hook! That is, if you’re lucky enough to be smooth about it, and your partner’s up for it.

So how do you get from normative second-date sex to browsing sex toy stores? Some people still find the use of sex toys as something taboo or something for the wicked, claiming sex toys and marriage don’t go well together. But then, can you feel happy if you’re not doing what feels good in the bedroom? When trying to bring it up, people deal with the fear of being rejected and seeming weird. People generally feel embarrassed about bringing up some desires that are not as conventional. That’s why it’s essential how you go about it, as well as when you go about it.

We’re trying to be sex positive here, and we firmly believe there’s nothing wrong with exploration. Still, turning up to your first date with a gimp mask may not be a good idea! Before your partner accepts to share the experience (especially if it’s something new for them), there needs to be an element of trust first. You should wait a little bit — at least a couple of nights spent together. Try to have an open talk about sex and stir the conversation into what both of you desire beyond what you’ve been doing so far.

You can try to be creative with it. For instance, you might think it’s smart to drop a pencil on the floor and say, “sheesh, am I clumsy or what?!” Then, as you pick it up, they notice there’s a fox tail sticking out your ass. It’s not impossible they get weirded out by this, so don’t do it whenever. When talking about sex, your partner will be in a more exploratory mood than they are while doing the dishes.

It’s Not a Substitute

Let’s think for a second why you’d want to introduce sex toys into the bedroom. Sex toys can add something new, and they can make your sex life more exciting. However, you should articulate why you desire such excitement! A wife using toys on her husband is not (necessarily) a woman inept of quality couple play. You should make sure your partner understands you’re not into sex toys because they’re boring in bed. After all, these toys are not there to replace normal sex — they exist to enhance it. 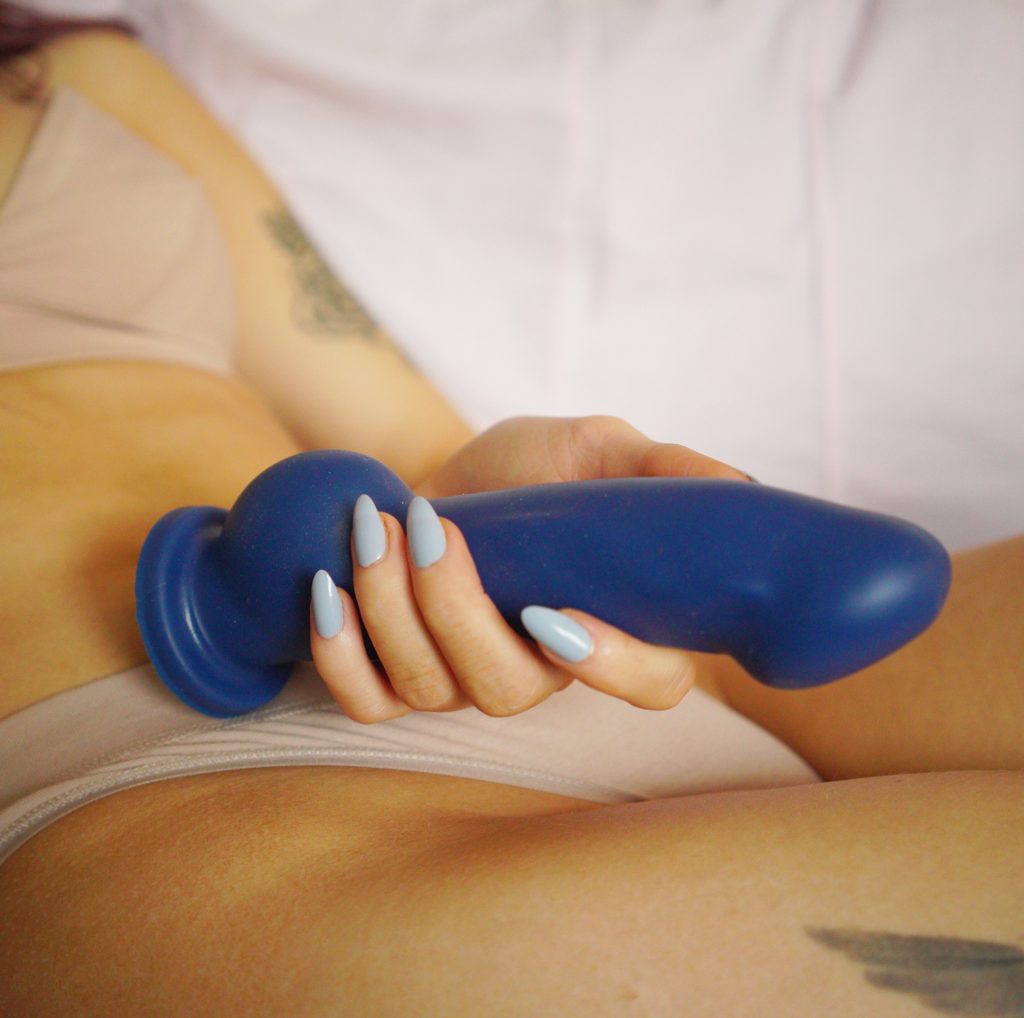 So have this in mind when you start bringing it up. Make sure it’s something that would be beneficial for both parties. Sure, you can say something like, “Oh, yeah, for sure; let’s do that same thing we always do, wow, I’m excited” using your ironic voice. But nothing kills the mood like a bit of passive-aggression! You should be particularly careful about that if your partner is of the male variety so that he doesn’t feel dimensionally inadequate.

The thing is, before we start using sex toys (on) ourselves, it’s not really a world we know a lot about. There are far too many people who thought about it but eventually decided against it due to fear of the unknown. The best way to get past that “I don’t know what’s going on” phase is to educate yourself. Granted, if you’ve been thinking about talking up sex toys with your partner, you’ve probably read several articles on the matter. After all, you’re reading this one, aren’t you? If you find some articles that you’ve found particularly interesting, share them with your partner.

That can be the easy way of informing your significant other that you’re into toying around, and it can also tell them which toys you’re exactly into. Of course, what we’ve said before still stands. Sure, you can just share the link on WhatsApp out of the blue, but the reaction to that can go both ways. They can get excited because you’re being naughty, but it can also backfire. Imagine sending one such article, and their response is, “So how long have you been reading stuff like this?” It’ll start an awkward conversation nobody really wants to have.

Here’s the deal: we all love spontaneity in our bedroom. Spontaneity with sex toys is crucial as well in order for it to feel natural. But we can all agree; there’s not a lot of spontaneity about acquiring one. First off, you have to browse about and find out which toys best suit you and your needs. Then, you want to do your research and buy only the best quality sex toys (you’re playing with your body here). As you can see, there’s a lot of forethought going into this, which is spontaneity’s arch enemy. Sure, you can do it on your own and just whip something out while having fun. But, as is the case with the aforementioned articles, reactions can vary.

Why not turn sex toy browsing into a couple’s activity? Once you’ve introduced the idea, and you’re confident your partner’s into it, go window shopping together! That way, they’ll know what they’re getting into, and they’ll also be able to chip in with their own ideas. As always, it’s essential to start small and not get too ambitious from the get-go. The best way to contain yourself is by doing it with your partner, as you don’t want to come off as a size queen that you are. So, before you jump right in, it’s always a good idea to involve your partner when choosing a dildo, a quick browse on lovegasm.co/collections/dildos will surely do the trick.

The only way for this activity to be a fun experience is for both parties to be into it. If you’ve brought up the subject a couple of times and weren’t greeted with a positive reception, drop it. It’s important that they’re willing to try it out as much as you are. If you keep bringing it up after several negative answers, they might feel pressured. At some point, they might feel obliged to try it out and give you what you want. But that can lead to strains in relationships, a loss of trust, and ultimately, a breakup.

If they feel you’ve pressured them into it by continuous nagging, they most likely won’t tell you “how about we don’t do it again.” You know, especially if you react overly excitedly (which you probably will).